In conclusion, in the few days I have had to submerse myself in these sociological topics, I can say that I have a whole new outlook and way of thinking of these thriving issues. When I first began to discuss these topics in class and read the cases I was able to notice that I used to ignore the fact [that] I saw race…[but] the fact that I told myself I didn’t see it was only a justification for me trying to avoid it. 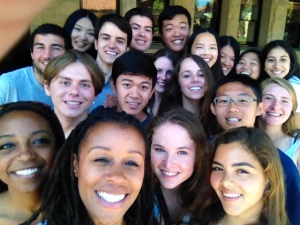 This course was the perfect way to end my graduate school experience. While I knew teaching was in my blood (both my mother and grandmother are teachers), I didn’t yet fully realize how powerful a great teaching experience can be for a student. I also did not realize how rewarding teaching is for the teacher. Through this intensive course, I was able to dialogue with future leaders — top high school students from around the world — about race, inequality, and oppression, topics they would likely never cover as a part of their high school curriculum. As a result, my students walked away with newfound knowledge and tools to spread information about the sociology of race and law. My students left this class able to talk about race with their families, peers, and communities. In our so-called “colorblind” and “post-racial” society, the ability to talk honestly and candidly about race is key to being able to move toward becoming a more just society.

In this Age of Obama, why are we still talking about legal remedies to racial inequality? The election of our 44th President suggested to many that the hard-fought goals of the 1960s Civil Rights Movement had finally been achieved, and declared our nation officially “post-racial.” Yet racial disparities continue to exist in all areas of society, evinced by stark racial differences in educational opportunities, achievement and attainment, worsening residential segregation by race and class, and disturbing disparities in criminal justice by race and gender. How can we understand progress towards racial equality in some arenas juxtaposed against legal retrenchment in others?

This Summer Institute explored this question from an interdisciplinary perspective, focusing on viewpoints from both law and sociology. Students read both Supreme Court opinions as well as foundational works in sociology on race and race theory. These materials were aimed towards activating what C. Wright Mills called “the sociological imagination,” or the ability to relate individual considerations with larger societal trends and historical processes. The goals of the course were both substantive and theoretical; students learned not just about the facts of racial inequality, but also about how to think about law and race as would a sociologist.

Each week the course focused on a different theme. The very first day, students were asked to write their “racial autobiography” in order to prime them to thinking about race, a subject than many young people have been taught not to talk about. Week one concentrated on establishing a foundational understanding of the social construction of race. Students read several chapters of Ian Haney Lopez’s White By Law: The Legal Construction of Race. Specifically, we worked on comprehending the various ways judicial interpretation of late 19th and early 20th century naturalization statutes and the 14th Amendment both created and reflected common beliefs about what it meant to be white, and conversely, what it meant to be non-white. At the end of week one, students wrote a critical response essay to the week’s readings, demonstrating that they not only understood the material, but also were able to connect the readings to each other and their own experiences.

Week two focused on racial disparities in education, especially as they relate to trends in residential segregation, affirmative action and current debates on cultural differences in orientation to education. Students read several chapters in Massey et. al.’s The Source of the River: The Social Origins of Freshmen at America’s Selective Colleges and Universities. This week required students to examine their own education experiences in the context of racial and class inequalities in school quality and higher education opportunities. Beginning in week two, students also took more responsibility for their learning, working in groups to present the readings, conduct an activity, and lead discussion for the first hour of class.

Week three focused on the criminal justice system and racial disparities in both criminal punishment and criminal victimhood. The students read a popular book, Michelle Alexander’s The New Jim Crow, which argues that mass incarceration has created a permanent underclass of young black men who are increasingly segregated from other segments of American society and also politically oppressed. At the end of week three, students presented their final capstone project, which asked them to re-write an aspect of their original racial autobiography, this time paying more attention to their ways their experiences have been shaped by the legal and sociological processes we’d discussed through the course. It was through this final project that students were able to fully activate their sociological imagination.

You can read the syllabus here.